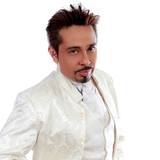 Adding up to over twenty national and international awards as singer, composer and musical director, Conductor and Contratenor Marconi Araújo holds a Bachelor’s degree in Composition from UnB and Master's Degree in Vocal Performance in the United States. His compositions had world premieres in important rooms such as: Ala Paolo VI in the Vatican at the invitation of Pope John Paul II; Chiesa S. Ignacio in Rome, in addition to having performed in rooms like Carnegie Hall in NY. As a Singer and Conductor, he also performed in operas, concerts and musical theater in front of national and international orchestras. Among the performances, the following titles can be mentioned: La Bohème, Lucia di Lammermoor, Madama Butterfly, The Barber of Seville, Alzira, Carmen, Jesus Christ Superstar, Lés Miserables (Broadway-style pioneer show in Brazil), Comunittá, Garota Glamour, Pernas Pro Ar, You're a good man-Charlie Brown, Cabaret,Crazy for you,Chaplin. Recently, he has been dedicating himself to the Vocal Direction of important segments, always bringing to it the specific Musical Theater technique. In TV, he participated as Vocal Director of the Christmas special "Xuxa e as Noviças" from TV Globo (the most famous TV channel in Brazil). In Cinema, he directed the production of High School Musical – O Desafio (Brazil). His appearances on radio and TV include Vatican Radio (Italy), Canção Nova (Italy and Portugal), Rai (Italy), WDR (Germany). He has a research work focused on the vocals of the countertenor and their relation with the baroque castrato. He has specialized in the repertoire of Alto Castrato in Handeliana, and made concerts with baroque orchestras promoting this repertoire. His last works include the Mass of Sta. Cecilia of Fr. José Mauricio Nunes Garcia, the concert "Il Barroco per Alto" with arias of virtuosity of Opera Séria Barroca and the recital "After a Dream"; all as a countertenor soloist, directed by the Conductors like Luiz Malheiro and Marcelo de Jesus, in Manaus - Brazil. As a lecturer, he spent the year of 2010 teaching advanced vocal technique and singing physiology courses with Dr. Silvia Pinho in Latin America. All that experience led him to open a Studio in São Paulo – Brazil, which offers premiere services specialized for singers. Studio Marconi Productions has been training and helping performers in Brazil for the last 10 years. Specific courses, practical approach, direct, faster, and effective use of the method "Contemporary Belting" is available to all seeking a career in performance. Studio Marconi provides coaching for all singing careers and covers all genres/styles of music thru a more technical approach. Many professionals, including some considered stars in entertainment, are students but some are just starting out and have come to Studio Marconi to achieve excellence. Marconi Araujo is known for introducing the concept of "singing with an actor’s voice” or “singing the way you speak". He is the author of "Belting Contemporâneo". Marconi Araujo and Studio Marconi have brought many Broadway shows to Brazil and now the Studio Marconi Araujo has an Ensemble with over 60 crossover singers. His interest in voice began after mother took him to a show at 6 years old and Marconi was brought on stage to perform songs. Marconi was immediately hooked and began studying all aspects of music as he quickly realized the need to understand everything. Originally, he wanted to play the piano but realized that conducting combined his passion and his studies. After receiving a Masters of Vocal Performance in the United States, Marconi returned home ready to share what he learned and to apply his skills making Studio Marconi available to others. He is hoping to change the state of performance in Brazil. A true passion, study, practice and discipline has been and will always be the driving force behind both Marconi's success and the success of Studio Marconi. The culmination of 10 years of experience gave Marconi Araujo his proudest moment when current and former students donated time to put on a spectacular anniversary performance. Future goals include pursing a Phd degree and writing a second book.